This week began a new exhibit at the Oshkosh Public Library titled Neighbors Past and Present: The Wisconsin German Experience. It's an excellent presentation about the Germans who migrated to this region and the enduring influence they have had on communities such as ours. If you're interested in understanding the culture of Oshkosh, this exhibit is essential. It's all on the second floor of the library and free and open to the Public. 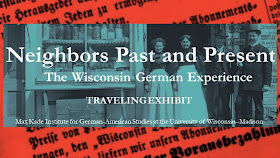 Of course, when you're talking about Germans in Wisconsin, beer is going to have to be a part of the discussion. Local breweriana collector Steve Schrage was given a display case to show off part of his substantial collection of memorabilia related to German brewers and beer bottlers in Oshkosh. My picture doesn't begin to do that display justice... 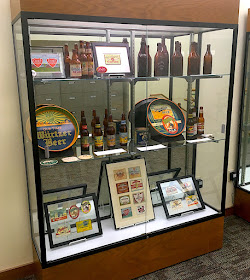 A portion of that display is given over to Oshkosh's independent beer bottlers of the late 1800s. I've written about this crew before HERE and HERE. Like the breweries they worked on behalf of, these bottling operations were run almost exclusively by German immigrants. Some of their bottles now on display at the library are incredibly rare.  It's worth a trip over just to get a look at those. It's probably the only opportunity most of us will ever have to see these items in person. 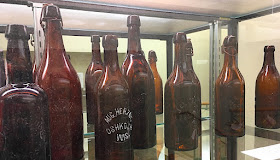 Neighbors Past and Present will be on display at OPL until February 28. In addition to the displays, the library will host a series of related programs. And OPL has put together a nice set of online resources that add substantially to the experience. I can't recommend this exhibit highly enough for anyone fascinated by how we became what we are.